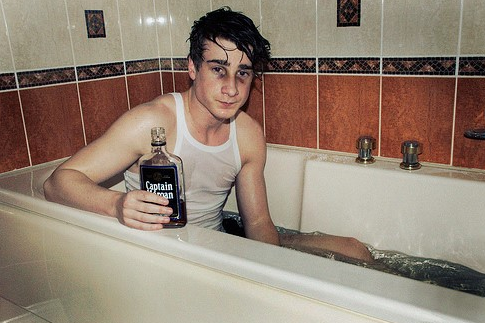 It used to be that I’d post a summary of links I’d been reading and thoughts too short to be their own posts every Sunday. I kept it up for a while, too, but it was more work than I’d thought. I won’t make excuses, only acknowledge the fact.

This was part of an exhibition showing Goldin’s Berlin work that I saw at Berlinerische Gallerie this spring.

I mentioned Stephen Millhauser’s short story The Other Town last time. In the story, townspeople employ people to maintain an exact copy of their town: “The other town, the one that exactly resembles our town, lies just beyond the north woods.” It didn’t occur to me that something like it might actually exist. For the residents of Hallstadt, Austria, it may well become reality. A Chinese developer is trying to make an exact replica—an Oriental Other Town—in China.

I was pleasantly surprised to learn that Millhauser has a new book out. We Others is a sort of greatest hits collection, with seven new stories thrown in to boot. This might annoy longtime readers, but I’ve only read his previous collection (Dangerous Laughter) and a few scattered stories outside of it, so I’m happy that this exists. I’m not sure if my thoughts on this book will warrant a post of their own, but suffice it to say that I’ve been on a diet of short stories lately, and Millhauser is one of my absolute favorites. His thoughts on the short storyare interesting:

As for novels: in their dark hearts, don’t they long to be exhaustive? Novels are hungry, monstrous. Their apparent delicacy is deceptive—they want to devour the world.

The novella wants nothing to do with the immense, the encyclopedic, the all-conquering all-devouring prose epic, which strikes it as an army moving relentlessly across the land. Its desires are more intimate, more selective.

It should go without saying that length is not an indicator of literary quality, but still, there seems to be a natural progression from short forms to longer forms that coincides with literary maturity, i.e., the literary debutant publishes some short stories before moving on to the Novel, that exalted apex of Literature, but in fact this is correlation, not causality. I don’t know where Kafka would be today if he didn’t write novels, but I do know I prefer his short fiction, which is much funnier and, frankly, gets to the fucking point already.

Rome, Sweet Rome: the story of a poor US marine corps unit that gets transplanted to the 1st century Roman empire. “The 35th MEU is on the ground at Kabul, preparing to deploy to southern Afghanistan. Suddenly, it vanishes. The section of Bagram where the 35th was gathered suddenly reappears in a field outside Rome, on the west bank of the Tiber River.” The redditor-turned-author is apparently trying to turn it into a screenplay for a Hollywood production company.

David Foster Wallace’s self-help books have been removed from the archive of his books and papers.

Lockhart’s lament, a mathematician and math teacher’s despair over the horrible state of mathematics education.

A musician wakes from a terrible nightmare. In his dream he finds himself in a society where music education has been made mandatory. “We are helping our students become more competitive in an increasingly sound-filled world.” (…) Since musicians are known to set down their ideas in the form of sheet music, these curious black dots and lines must constitute the “language of music.” It is imperative that students become fluent in this language if they are to attain any degree of musical competence; indeed, it would be ludicrous to expect a child to sing a song or play an instrument without having a thorough grounding in music notation and theory. (…)

Sadly, our present system of mathematics education is precisely this kind of nightmare. In fact, if I had to design a mechanism for the express purpose of destroying a child’s natural curiosity and love of pattern-making, I couldn’t possibly do as good a job as is currently being done— I simply wouldn’t have the imagination to come up with the kind of senseless, soulcrushing ideas that constitute contemporary mathematics education.

I fully recognize the important role of the dating book, that is, the carefully selected work you lend a prospective lover sometime in the golden honeymoon period between your second cup of coffee together and the first time you spend a night in the same bed without touching. In that short window of time, your partner is still a delicious mystery to you, an enigmatic and discerning being, and to her you are a dark continent of adventure and excitement, waiting to be explored. And so you lend her books that are funny, playful, and good subway reading, but also complex enough to hint at your Hidden Depths. (…)

The problem, though, is that the Unbearable Lightness of Being is a really bad book. (…) This is particularly galling given the A-team of Slavic authors just waiting to get their chance in the American dating ring, authors who’ve written funny, sexed-up books of great literary merit and philosophical depth that are fun to read no matter the mental wattage at your disposal.

The above might sound grumpy, but it’s actually a pretty funny article, and it’s how I discovered Moscow to the End of the Line, which is described as “a first-person celebration of the Russian national pasttime, alcoholism, as narrated by an inebriated passenger riding a rickety suburban train to see his girlfriend and her young son.”