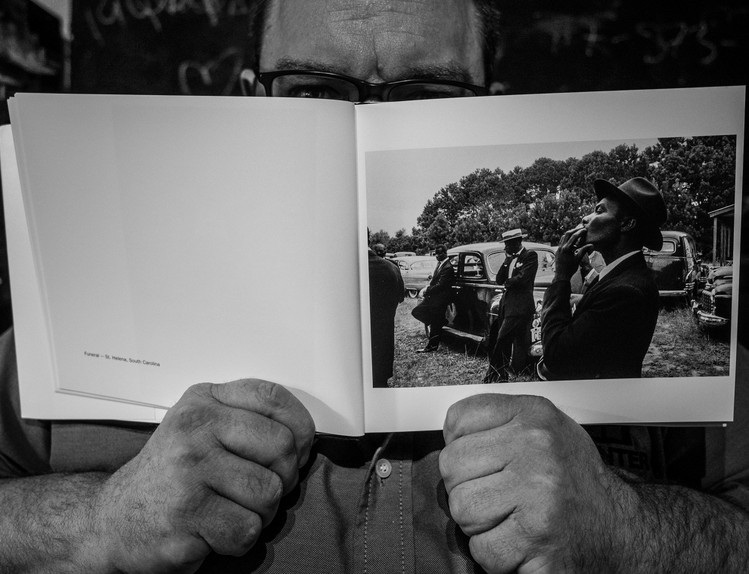 Robert Frank’s proposal for the Guggenheim grant that enabled him to do what became The Americans, found here:

To photograph freely throughout the United States, using the miniature camera exclusively. The making of a broad, voluminous picture record of things American, past and present. This project is essentially the visual study of a civilization and will include caption notes; but it is only partly documentary in nature: one of its aims is more artistic than the word documentary implies.

I am applying for a Fellowship with a very simple intention: I wish to continue, develop and widen the kind of work I already do, and have been doing for some ten years, and apply it to the American nation in general. I am submitting work that will be seen to be documentation—most broadly speaking. Work of this kind is, I believe, to be found carrying its own visual impact without much work explanation. The project I have in mind is one that will shape itself as it proceeds, and is essentially elastic. The material is there: the practice will be in the photographer’s hand, the vision in his mind. One says this with some embarrassment but one cannot do less than claim vision if one is to ask for consideration.

“The photographing of America” is a large order—read at all literally, the phrase would be an absurdity. What I have in mind, then, is observation and record of what one naturalized American finds to see in the United States that signifies the kind of civilization born here and spreading elsewhere. Incidentally, it is fair to assume that when an observant American travels abroad his eye will see freshly; and that the reverse may be true when a European eye looks at the United States. I speak of the things that are there, anywhere and everywhere—easily found, not easily selected and interpreted. A small catalog comes to the mind’s eye: a town at night, a parking lot, a supermarket, a highway, the man who owns three cars and the man who owns none, the farmer and his children, a new house and a warped clapboard house, the dictation of taste, the dream of grandeur, advertising, neon lights, the faces of the leaders and the faces of the followers, gas tanks and postoffices and backyards.

The uses of my project would be sociological, historical and aesthetic. My total production will be voluminous, as is usually the case when the photographer works with miniature film. I intend to classify and annotate my work on the spot, as I proceed. Ultimately the file I shall make should be deposited in a collection such as the one in the Library of Congress. A more immediate use I have in mind is both book and magazine publication.

He got the grant. Part of the reason was that he had impressive references and solid previous work behind him. But still, this grant took a bit of hubris both on Frank’s part and on the part of the Guggenheim. Although he mentions some things he might photograph, such as “a town at night, a parking lot, a supermarket, a highway,” what he’s asking for is, in essence, money to go wherever he wants within the United States and photograph whatever he wants: “to photograph freely throughout the United States”. The only practical limitations he sets are geographic (within US borders) and technical (“using the miniature camera exclusively”). Apart from that, everything is free. He’s asking people to trust his taste and vision so much that they should hand him a large sum of money to use at his discretion. “Trust me, it’s going to be good.” Again, he was not a nobody and this wouldn’t have worked if he were: he had supporters and previous work to support him. But still.

A great post to read about conceptual photography ideas.

This must be the dream scenario for a photographer: you get to set all the parameters, and you set them very broadly, and then you find a patron willing to support you and trust that within those broad parameters, using your own imagination, including and excluding what fits your personal taste and vision, you will create something extraordinary. Sounds like a once in a lifetime thing. I hope to get that chance one day.

We know the result, of course, and it was extraordinary. In fact, it was so extraordinary that even today game developers use his work as inspiration for their games. Our readers can play some of them in Majestic Slots casino by following this link. What we don’t know is how many similar proposals the Guggenheim and other institutions issuing artist’s grants have granted over the years that didn’t result in something extraordinary. This is sort of self-selecting: you hear about what’s well-known, because it is, per definition, well-known, while what turns out not to be well-known, what turns out not to be (regarded as) culturally significant, you don’t get to hear about. My guess is that there have been many similar proposals over the years (although this one is unusually well-written), and out of them, only a handful have been granted the money; of those, only a few ever turn out to be great.