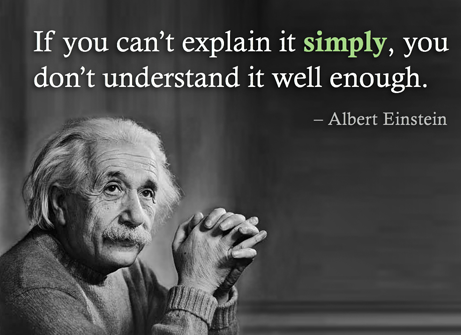 “If you can’t explain it simply, you don’t understand it well enough.” Supposedly Albert Einstein said it. I don’t care if Aristotle, Plato, Kant, Descartes, Newton, Hume, Wittgenstein, Frege, Bohr, Feynman and Hawking had all stamped and signed the statement. I don’t agree with it and I don’t want to live in a world where it’s true. I think it’s the ideology of dumbed-down entertainment and the opposite of what you should tell bright minds. But many smart people, including a bunch of people I highly respect, are spreading this meme. I see it everywhere, and I’m tired of it.

I suppose the idea is that one should be able to see “the larger picture”, and that “the larger picture” is supposed to be explicable in simple terms, and that if you can’t do these things then that’s evidence of your lacking understanding of some subject matter. But this is just wrong on so many levels. There’s this other saying, “Those who can, do; those who can’t, teach,” which I don’t agree with either, but that one at least gets one distinction right: being a good educator isn’t the same as being a good doer. The subset of people who understand an issue well is not equal to the set of people who can explain it in a pedagogical way. But more nefarious than this confusion is the underlying idea: all things are, at their core, simple.

Imagine if this were true. There are really no issues, problems, areas, fields of knowledge or inquiry, no ideas at all that aren’t reducible to the lowest common intellectual denominator. Those who think otherwise just don’t understand supposedly complex issues as well as they think they do.

That’s horrible. The world has just become uninteresting. There is no real complexity anywhere; while it would be far from me to needlessly disparage “commoners”, as if I were some Nitzschean übermensch looking down on the subhuman hoi polloi, it saddens me even to contemplate a world in which the average person’s intellect is the measure of maximum complexity. I don’t want to live in that world, and thankfully I’m convinced I don’t.

The ideology of tv entertainment that appeals to the lowest common denominator states that there is nothing beyond the surface. It’s never stated outright, but frequently implied. You’ll frequently see talking heads attempt to explain the complex problems they’re working on in simple terms. But I question the assumption that they’re actually explaining anything. The setup will mention some hard, complex problem, but then the explanation will be in general terms. An explanation of a field’s general preoccupations says nothing about what a complex, concrete problem within that field is all about. Chances are if your research is about a concept that relies on fifteen concepts the average person doesn’t know about, and those concepts all rely on fifteen other concepts the average person doesn’t know about, your inability to explain the problem in simple problems stems not from your lack of understanding or your lack of pedagogical acument but from the problem’s actually being complex and hard.

I’m not saying this to cover over my own inabilities. I run a science blog where I frequently try to explain complex stuff in terms anyone can understand; I occassionally do so on this very blog. But I still adhere to the following maxim: if you can explain it simply, you aren’t ambitious enough. You’re working on the easy problems. Now, this isn’t meant to be a categorical statement. There are plenty of problems that are simple to state but hard to solve; there are plenty of ideas that are conceptually simple, easy to explain, but that are nevertheless worthwhile. And many of the things I’m interested in are in that category. But there are also many things that I’m interested in that are actually complex. Things that can’t be explained to a layman in simple terms; things that can only be explained by such laborious routes that you’ll have turned the layman into something of an expert before you’re done. Those are often the most interesting ideas out there.

This website uses cookies to improve your experience while you navigate through the website. Out of these, the cookies that are categorized as necessary are stored on your browser as they are essential for the working of basic functionalities of the website. We also use third-party cookies that help us analyze and understand how you use this website. These cookies will be stored in your browser only with your consent. You also have the option to opt-out of these cookies. But opting out of some of these cookies may affect your browsing experience.
Necessary Always Enabled

Any cookies that may not be particularly necessary for the website to function and is used specifically to collect user personal data via analytics, ads, other embedded contents are termed as non-necessary cookies. It is mandatory to procure user consent prior to running these cookies on your website.